On 18 April 2019 light rail began carrying members of the Canberra public along light rail stage one from Gungahlin to Civic. The ACT Government combined the official launch and letting the public ride and experience the light rail by holding a community ballot, where several hundred people won Golden Tickets, letting them on the first service. This ‘soft launch’ was also to be a test ahead of the official opening on Saturday 20 April.

The launch came the day after the national rail safety regulator accredited the network for operation, and on the day that the ACT Government announced that the light rail project came in at $707 million dollars, $76 million dollars under budget.

It was a fairly simple day with Golden Ticket winners advised to arrive at a specific stop (Gungahlin, Dickson or Civic), have their name checked off, and then wait for their vehicle to leave. It would then travel to Civic (or for the lucky passengers that left from Gungahlin, they did a complete return journey) where people could either travel back to Dickson or Gungahlin, or wait for the plaque to be unveiled. After the unveiling (and press conference) there was a light lunch for invited guests where a cake was cut and consumed (see photo further down…)!

The excited passengers waited at each of the three major stops, boarded and set out for the first trip! Some stayed to observe the political events, but most went excitedly about the rest of their day, after being lucky enough to be on the very first trip on Canberra’s brand new light rail. Several PTCBR members attended and were fortunate to be invited to the launch and the lunch.

For people that have been campaigning for light rail in Canberra, and better public transport for many years it was a truly momentous experience. Riding in a brand new light rail vehicle, from Gungahlin to Civic, was very satisfying. It has already started to change Canberra for the better, and will for the next century.All the people associated with ACT Light Rail Coalition, ACT Light Rail and the PTCBR should be proud of the hard work they have put in over the last two decades.

The ACT Government deserve the credit for this, it has been a long hard slog with much political skin shed to get from an idea floated by former Transport Minister Simon Corbell, to a plaque being unveiled at the official opening by Chief Minister Andrew Barr and the Transport Minister Meegan Fitzharris. Administration of the project by Transport Canberra has been exemplary – with the project coming in $76 million under budget. Although the construction by Canberra Metro took a few months longer than anticipated, it is still a tremendous achievement. Light rail will be a lasting legacy, and something that the ALP and Greens can be rightly proud of.

This post has lots of photos of the days events, and a few links to local media coverage. 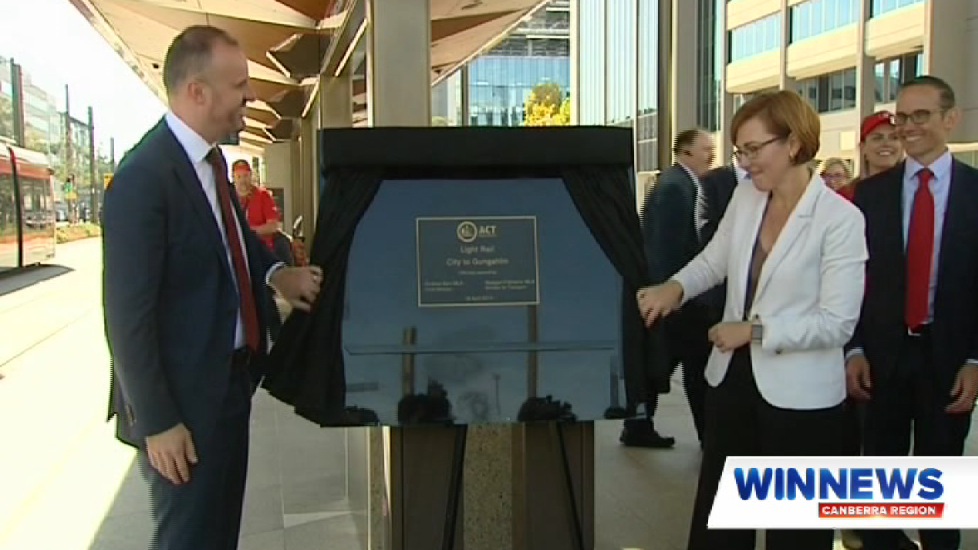 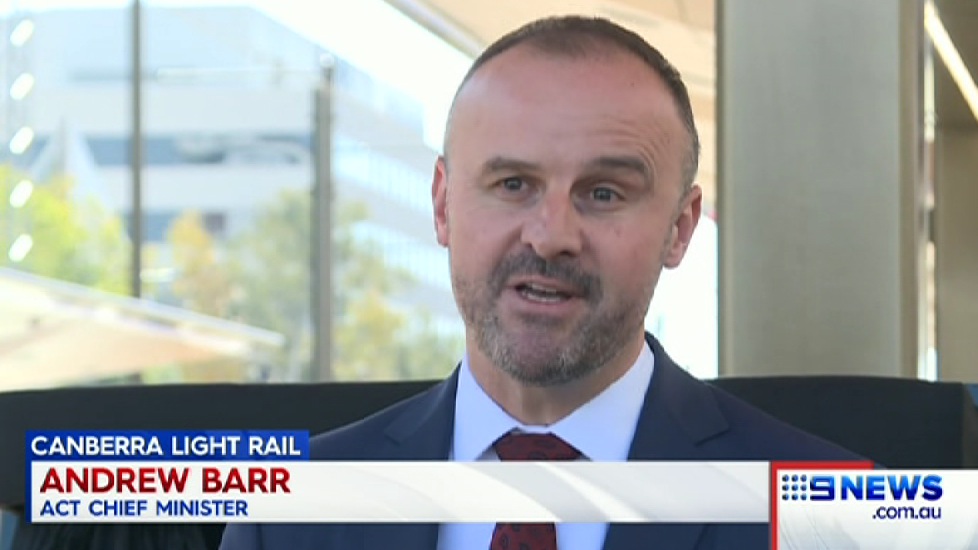 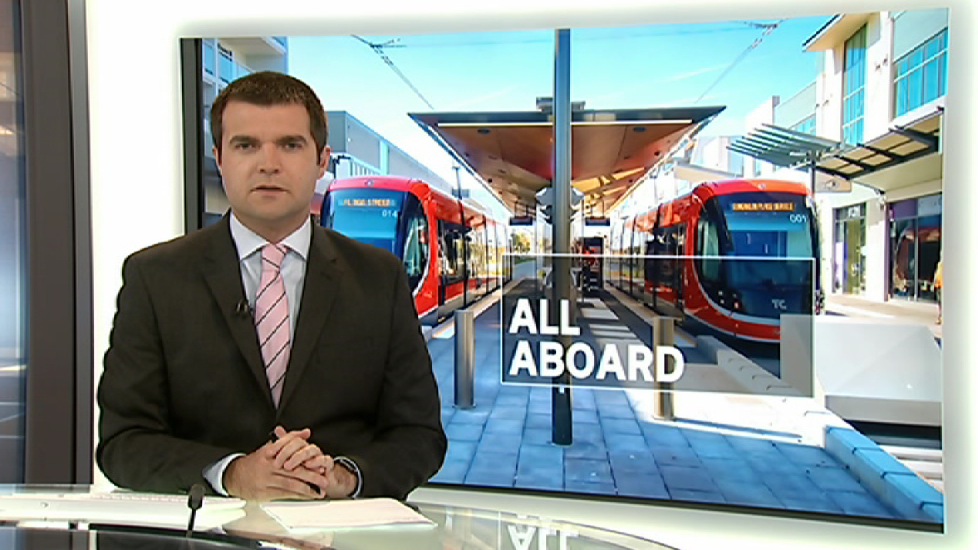 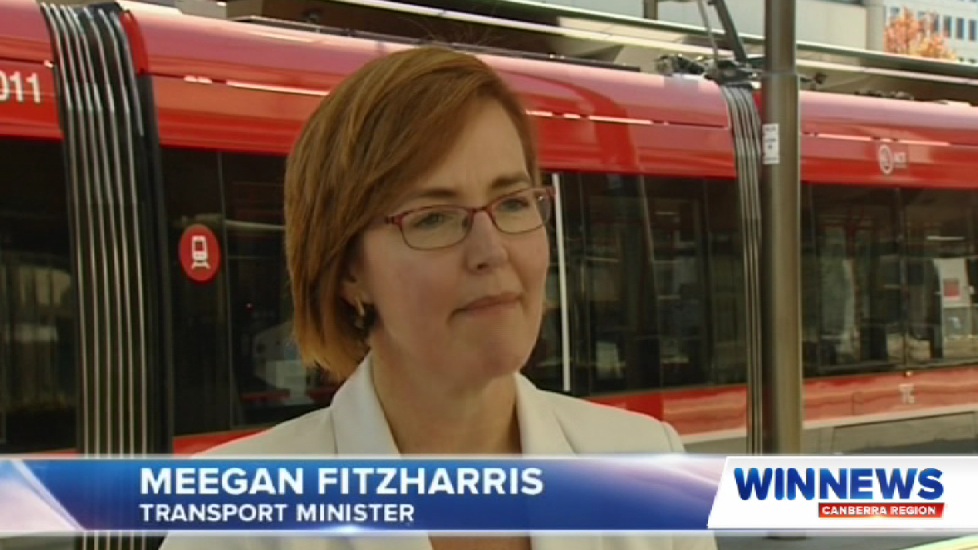 Photos from the official opening day 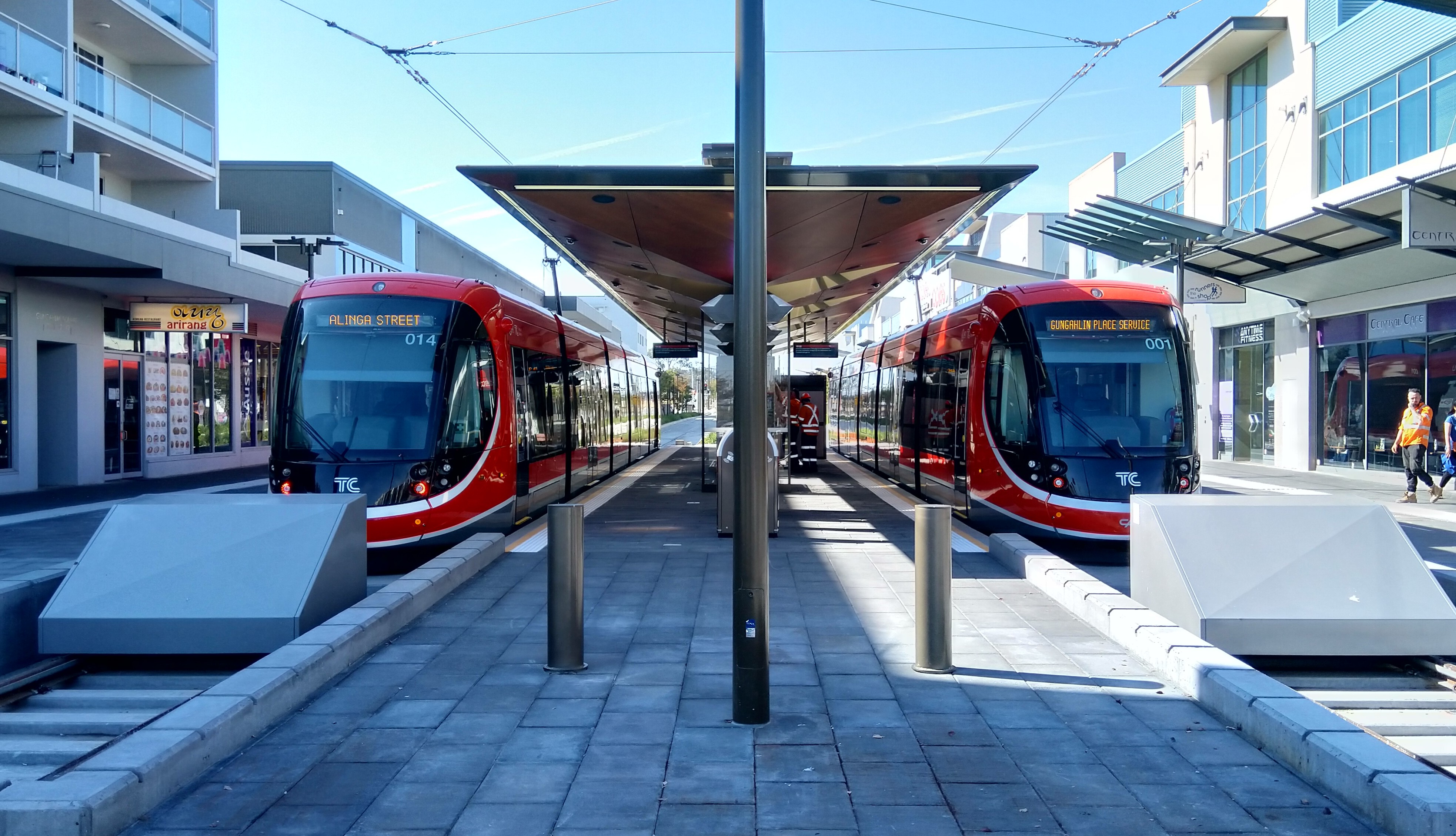 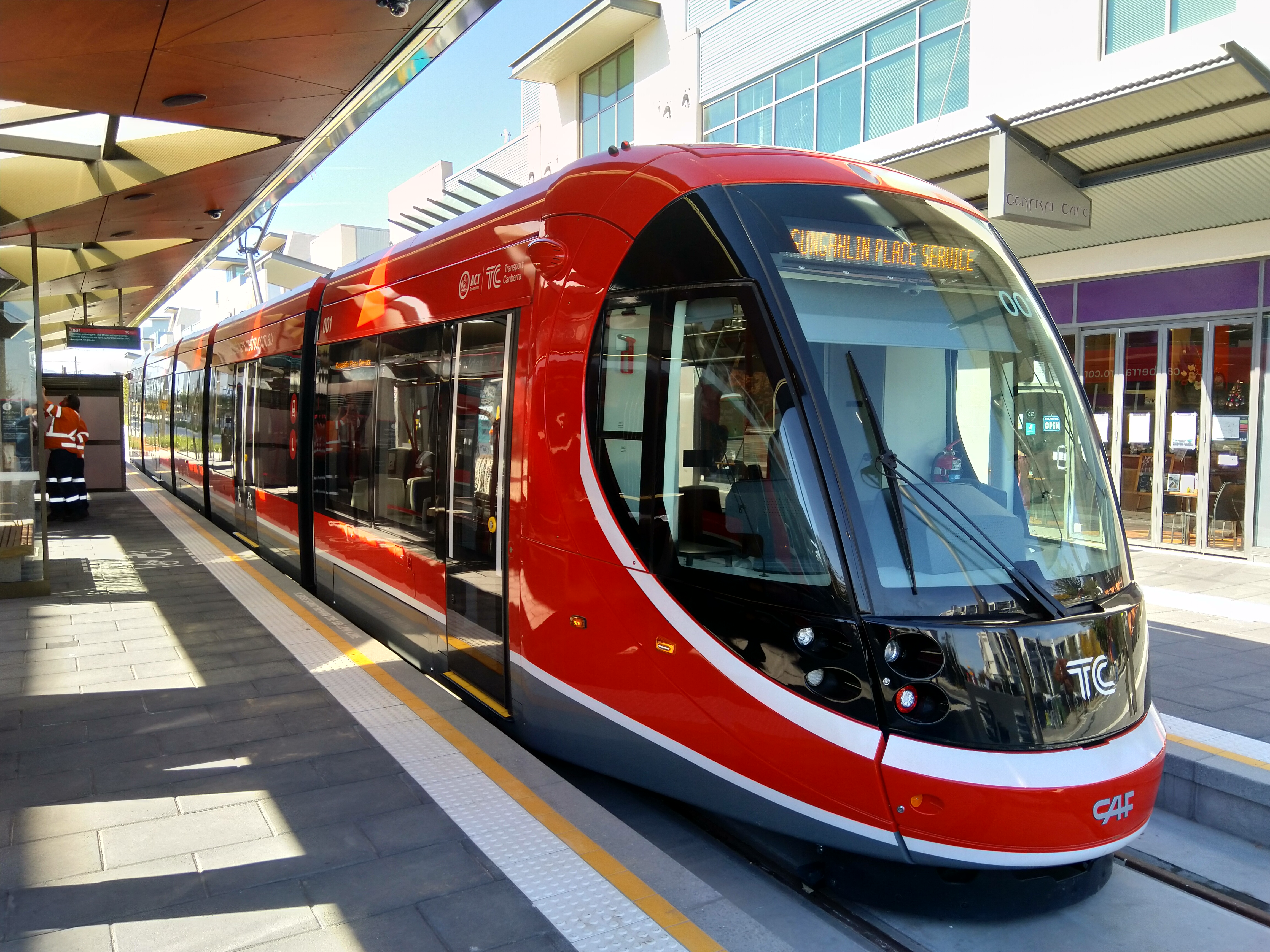 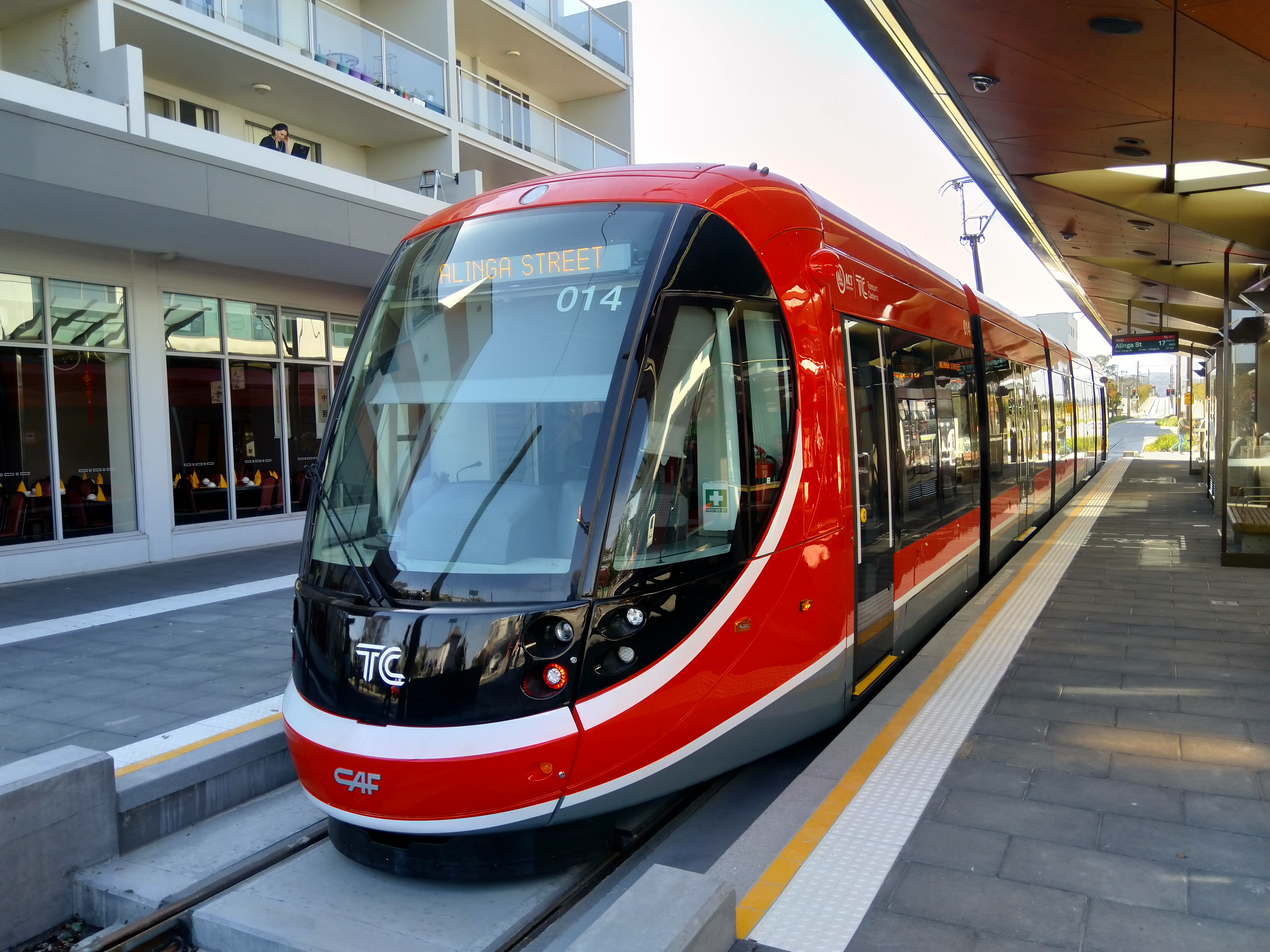 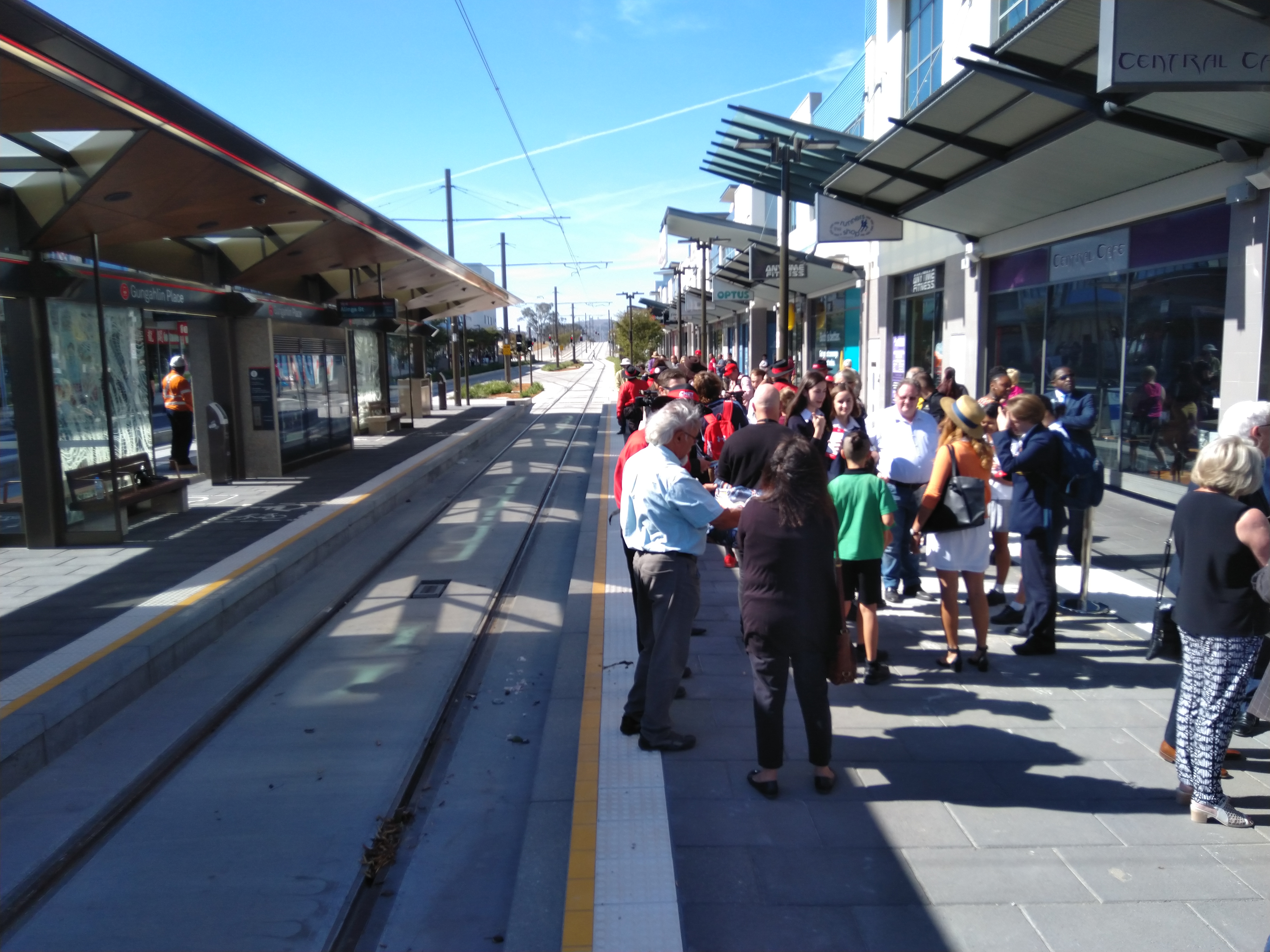 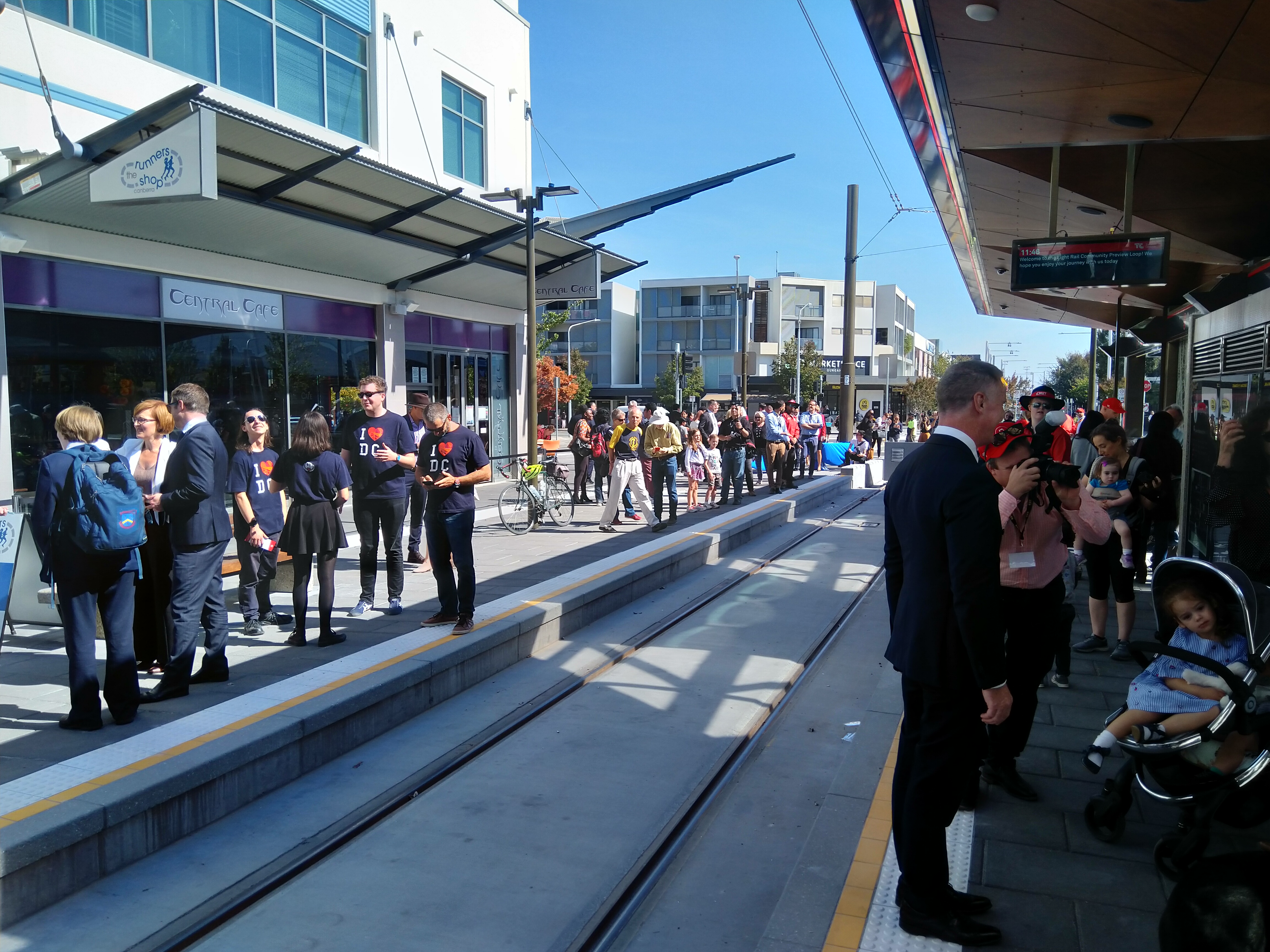 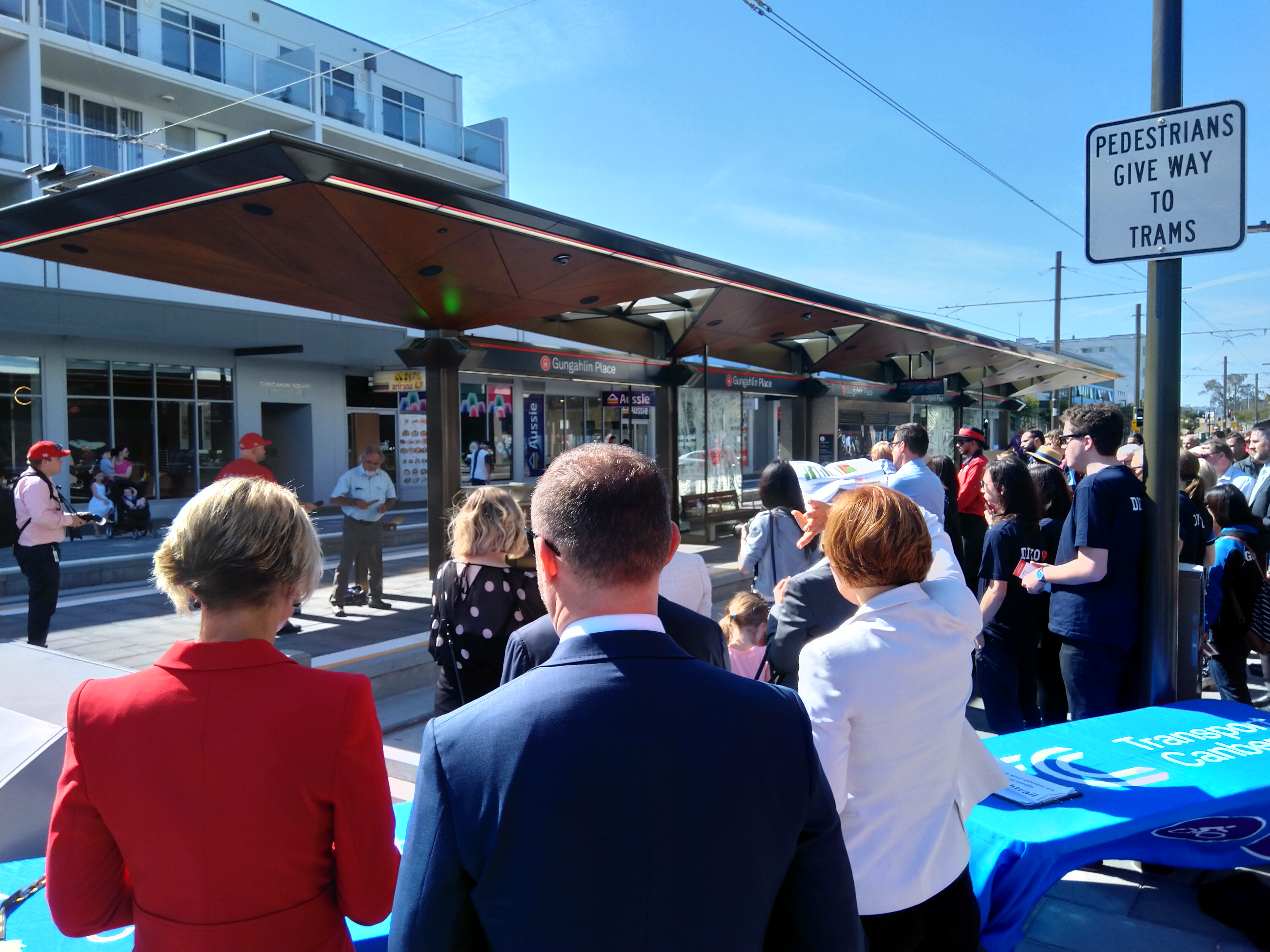 Politicians on hand to witness the very first light rail trip for passengers! 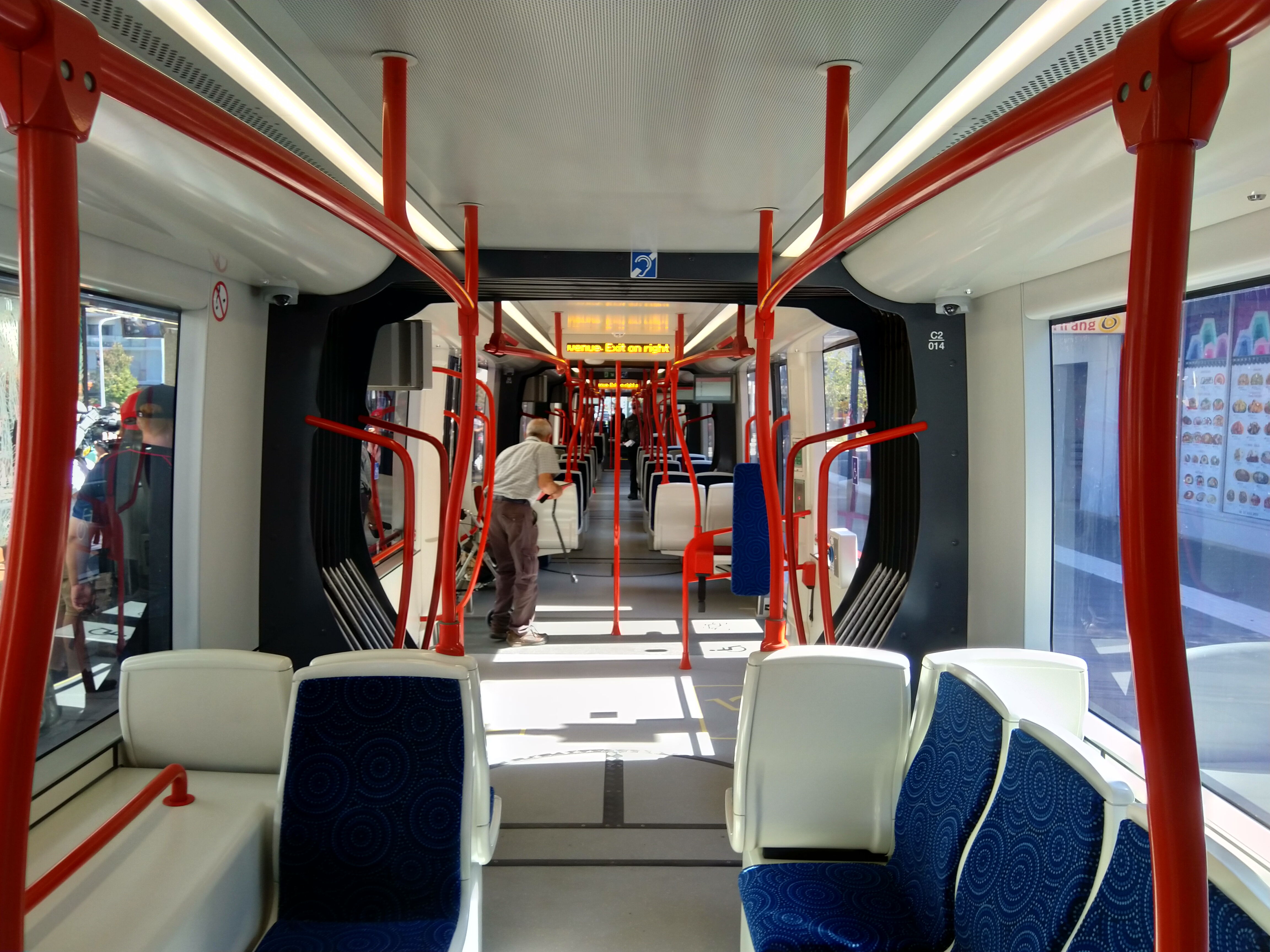 After arriving, the doors opened, and people raced onboard. That old guy with the walking stick is faster than you think! 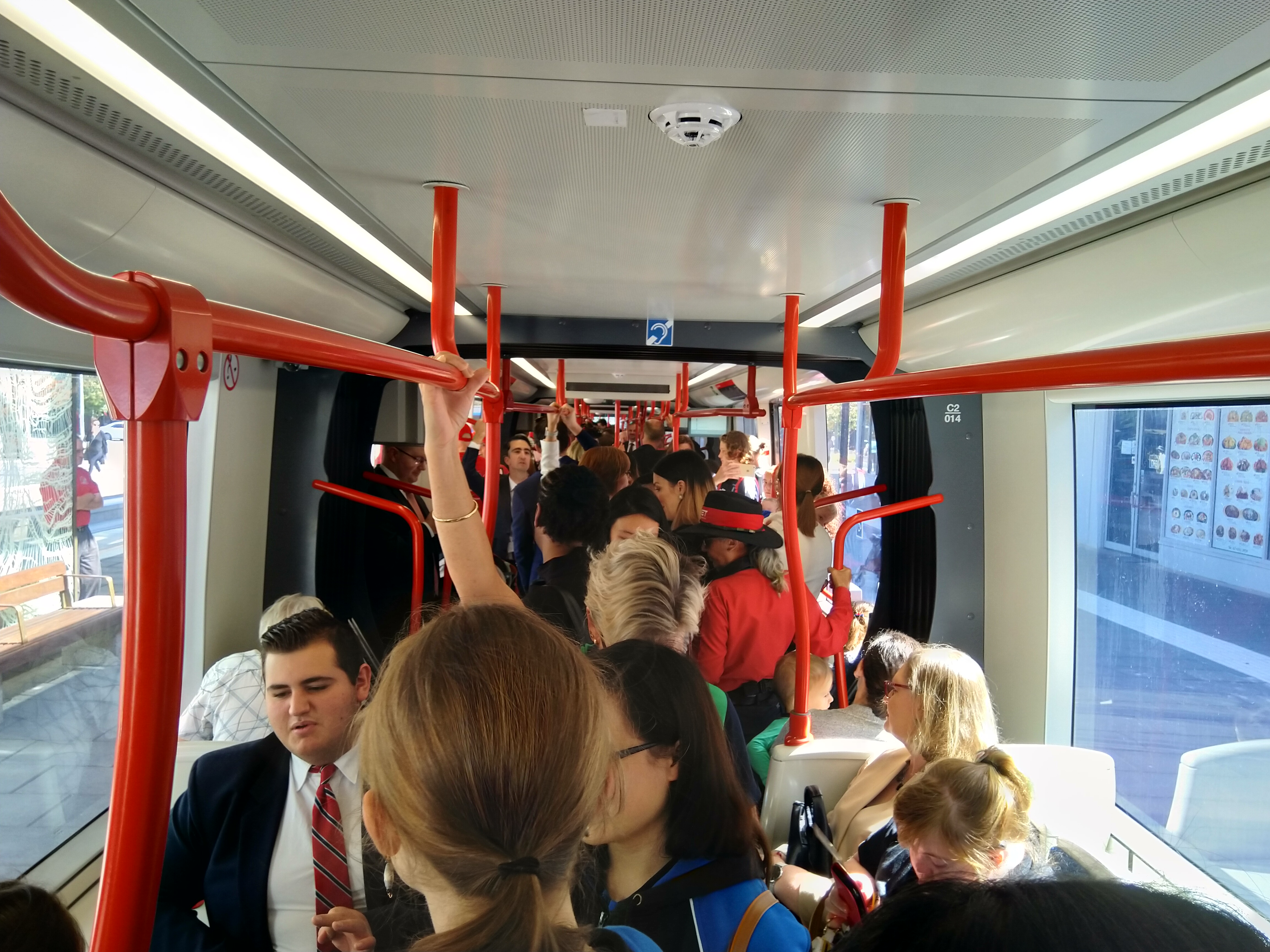 Moments later the LRV was full 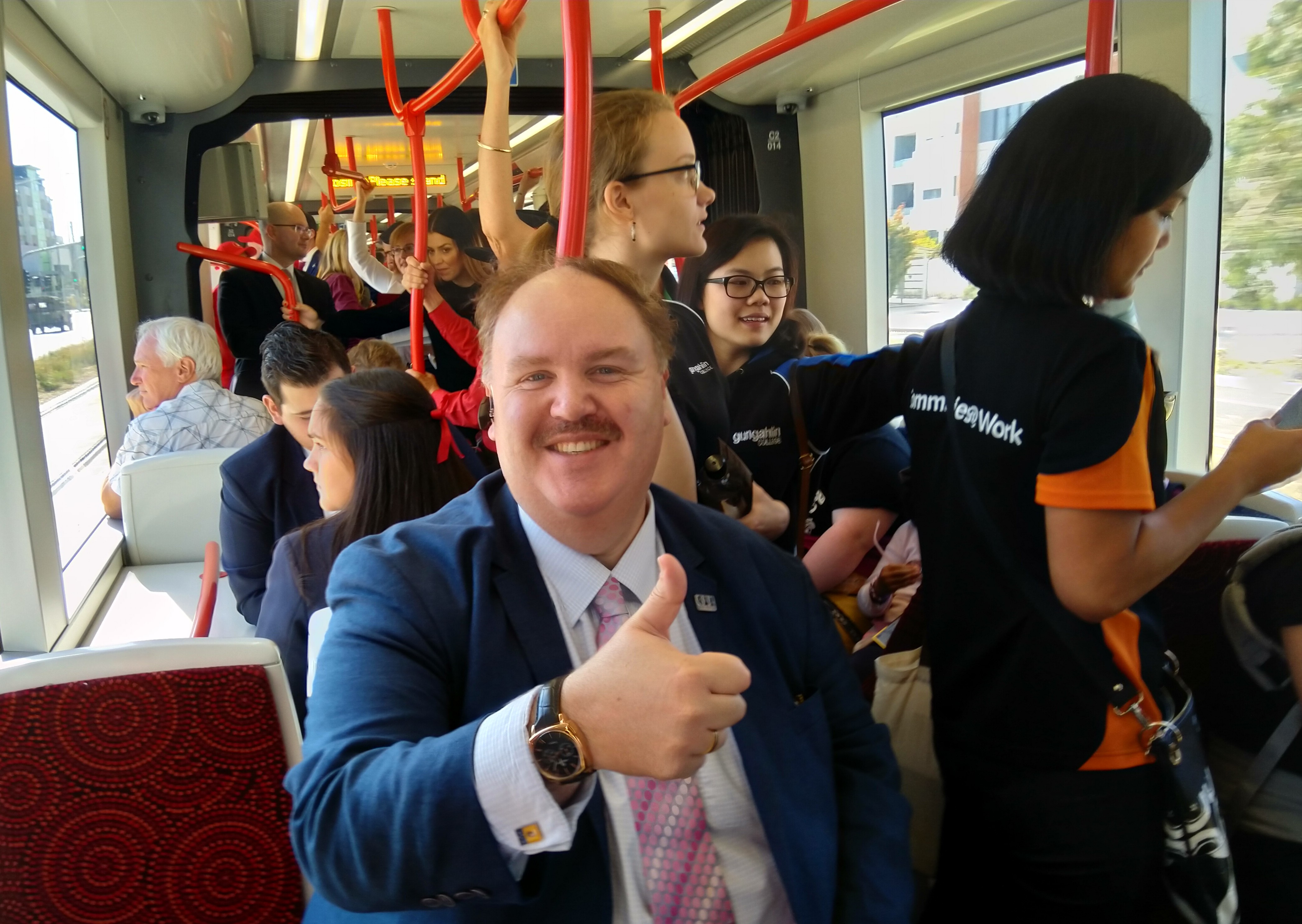 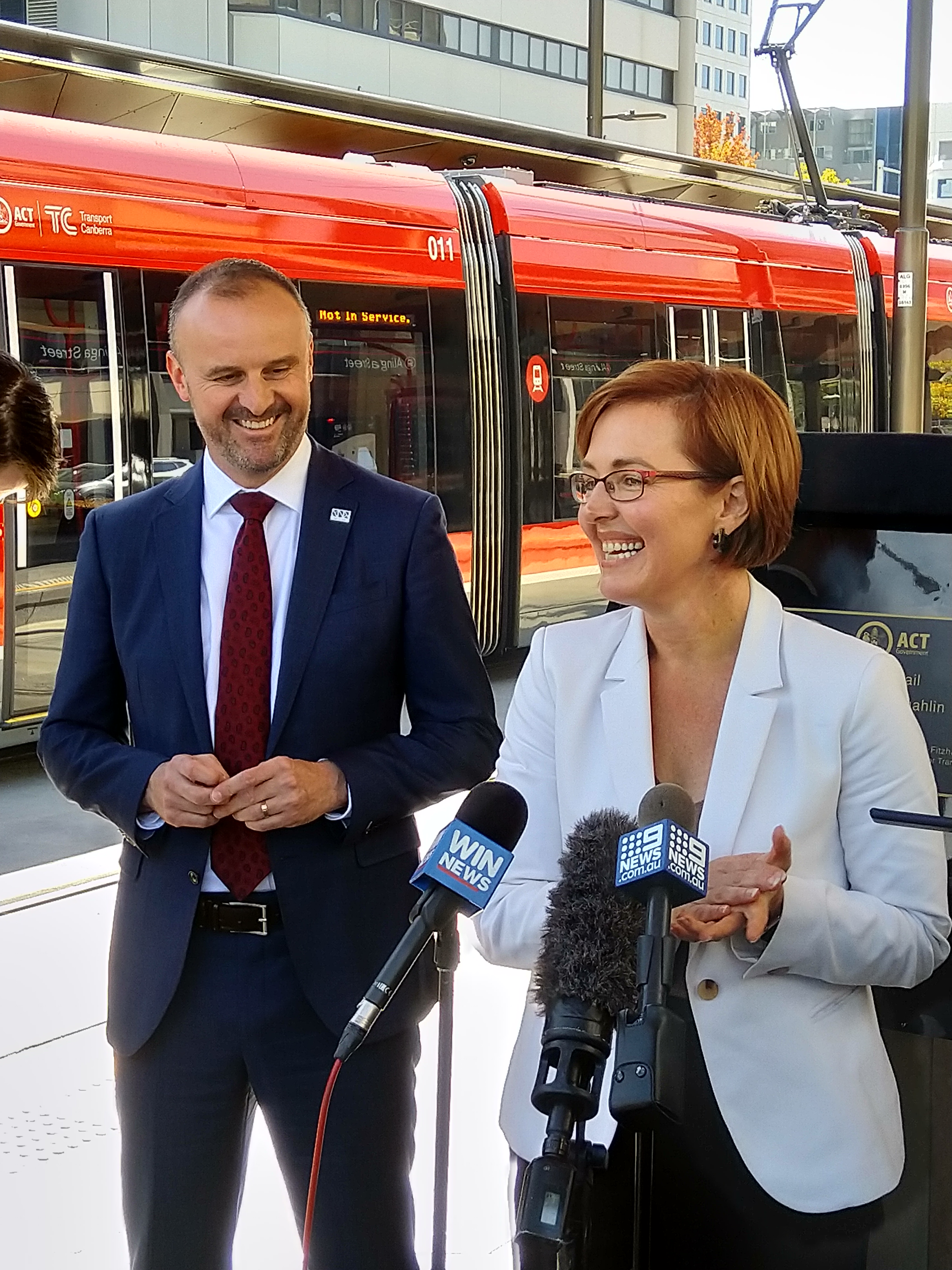 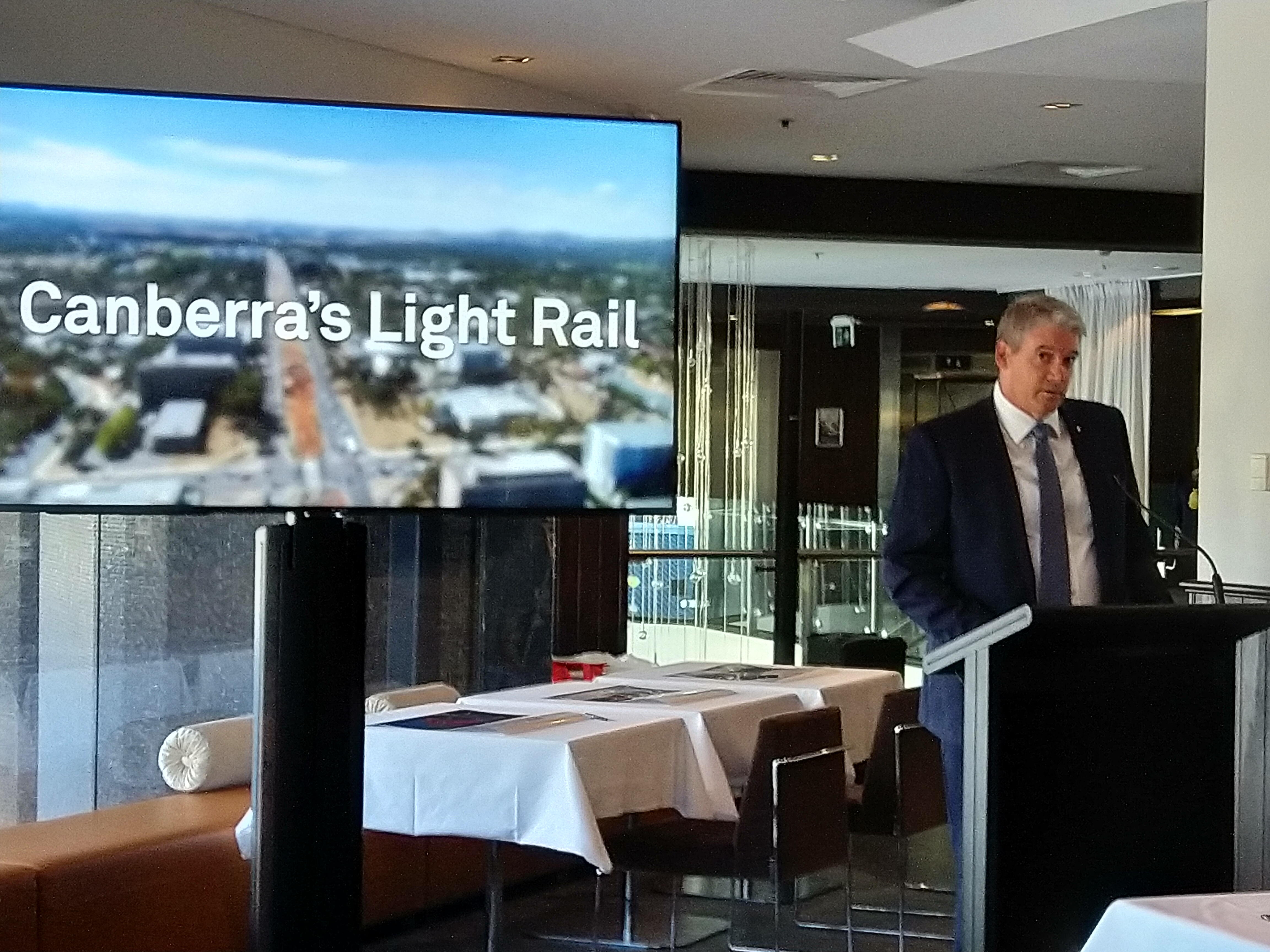 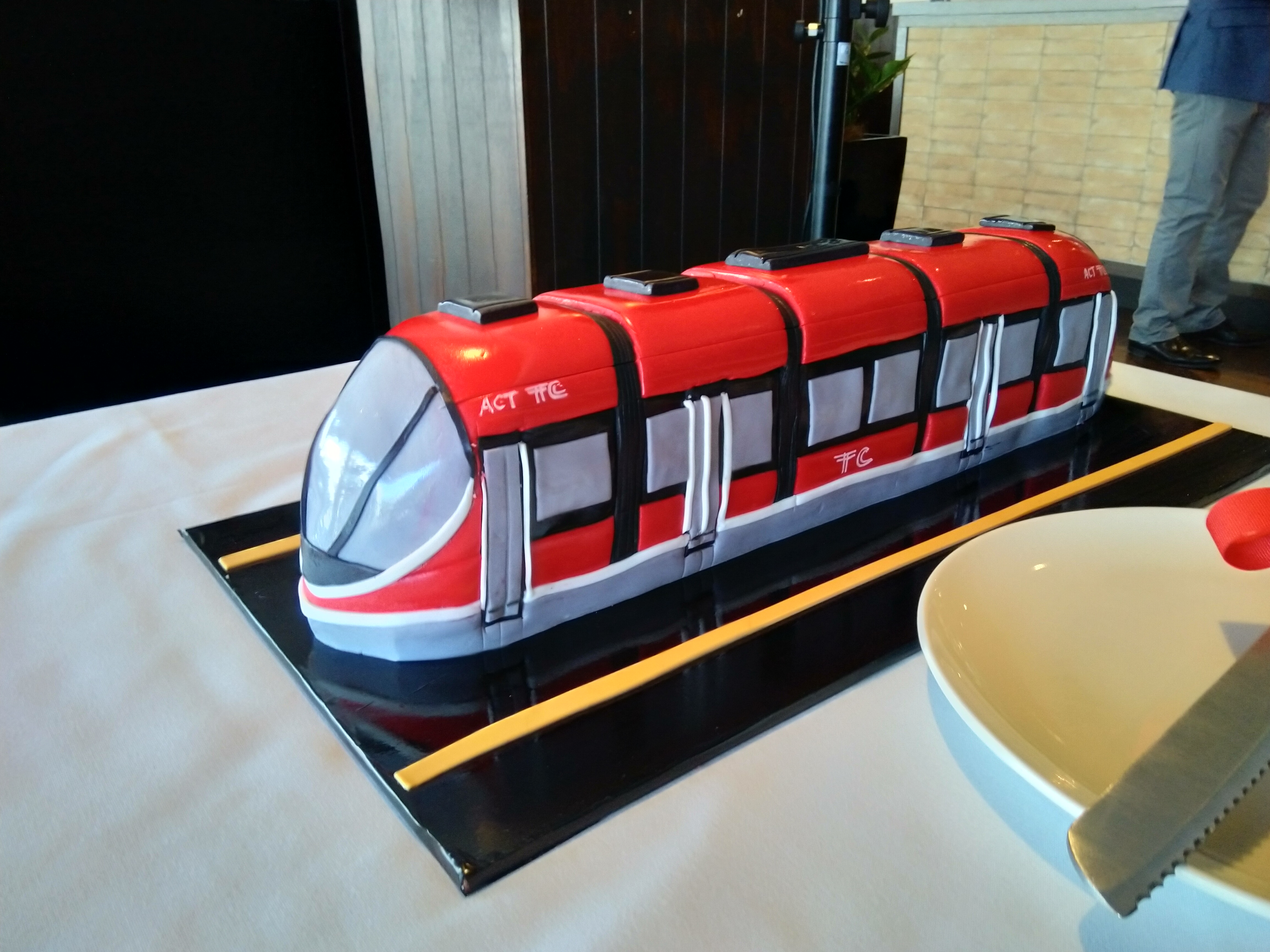 To stay up to date with all public transport and planning issues in Canberra,join the PTCBR here and visit our Facebook Group.