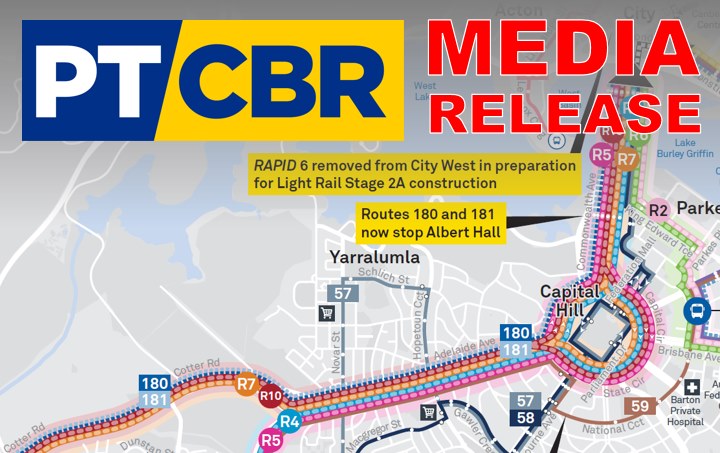 Mr Ryan Hemsley, PTCBR Chair said “The changes announced today address a number of concerns that have been raised by both our members and the wider public. The proposed improvements to bus routes in Tuggeranong, Gungahlin and North Belconnen are especially welcome, and will hopefully lead to more people using public transport in these areas”.

On the issue of weekend buses, Mr Hemsley added “While the improvement in Saturday local bus services is appreciated, we call on the government to ensure full weekend service frequencies are restored as soon as possible, preferably on a rolling basis.”

Looking ahead, Mr Hemsley said “As part of its climate change strategy, the ACT Government has long-term ambitions to bring about a 40-45 per cent mode shift away from private car use by 2045. To meet this target, the government needs to seriously ramp up public transport services.”

“We look forward learning more about how the government intends to meet this ambitious target.”

You can read a copy of PTCBR’s feedback on Network 19 here.

Ryan Hemsley is the Chair of the Public Transport Association of Canberra, the Canberra region’s peak public transport lobby group.

The Public Transport Association of Canberra (PTCBR) welcome the announcement of Network 19 and look forward to engaging with the Government and Transport Canberra on ensuring that the local services and enhanced rapid services suit the changing nature of Canberrans transport needs.

The introduction of light rail in late 2018 delivers a rare opportunity to introduce large numbers of new bus services, and extend operating hours, especially around Sunday services. The PTCBR expect to see increased local services in all parts of Canberra, but particularly in the outer fringes of Canberra in areas such as Tuggeranong and West Belconnen.

There are several important service elements that need attention:

The Network 19 consultation exercise offers the community a good opportunity to look at the entire network of public transport that is being created around a rapid transit spine. Light rail stage one, and expanded rapid buses deliver a viable alternative to the private car.

PTCBR Chair Damien Haas observed that “Network 19 is a good start on integrating light rail with buses, and it’s where Canberra needs to go. More frequent local bus services will mean that even if a person needs to change modes once, their overall trip times should reduce. This particularly impacts people living in the outer suburban areas.”

On the changes to the bus services around schools PTCBR Chair Damien Haas said that “These changes will also also benefit parents, children and local schools, with routes altered so buses pass more schools than under the previous bus networks. This should encourage parents to allow their children to use regular public transport, instead of driving kids to school.”
Mr Haas also observed that “We would like to see an increased focus on Demand Responsive Transport, Flexible Buses, Community buses and a more transparent mechanism to access those services. Many of these services exist but aren’t well known, especially to the people that really could utilise them such as the aged or disabled members of our community”.

PTCBR look forward to consulting its members and engaging in consultation with Transport Canberra to ensure that any issues identified during consultation can be altered before implementation.
The PTCBR are aware that these changes are significant and will have an impact on peoples travel patterns. “We don’t expect that 100% of Canberrans will be pleased with the massive changes, but the changes are consistent with the future public transport network we need to create for a more livable city. More frequent rapid transit integrated with more frequent local buses. That’s going to help people make that decision to leave the car at home, become a one car family or incorporate more cycling and walking into their daily trips to work, school, shopping or visiting friends.” Mr Haas said.
The changes to bus stops will be keenly observed by the PTCBR “It’s clear that there will be changes to bus stops with several hundred relocated or removed, and that will be noticed by people used to catching a bus from that spot for the last decade or more. Stops every 400 metres or so are fairly generous, and increasing that stop spacing by a hundred metres or so should introduce efficiencies in local services and route time savings. We’d like to see more covered stops as well as better lighting and seating associated with this change.” Mr Haas said.
PTCBR will be holding a meeting for its members in July to discuss Network 19 in more detail, and engaging with Transport Canberra throughout the consultation process.
Damien Haas is the Chair of the Public Transport Association of Canberra, the Canberra regions peak public transport lobby group.