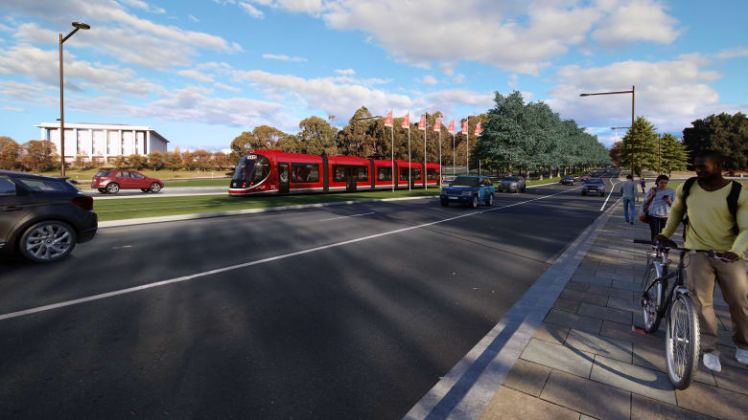 Planning for light rail from the City to Woden is well underway, with the ACT Government releasing a mid‑year update on stage 2.

The ACT Government is committed to constructing light rail between Gungahlin and Woden via the City, Parkes and Barton as the backbone of its vision for a city-wide integrated public transport network. The government reaffirmed its commitment to developing light rail stage 2 with $12.5 million invested in progressing the project through the 2018-19 financial year.

The ACT Government expects to make a final investment decision in respect of stage 2 once greater clarity is achieved on the Commonwealth Government’s support for the project and any associated planning requirements.

Minister for Transport and City Services Meegan Fitzharris said the next steps for the project included developing the design in close consultation with the National Capital Authority (NCA), making planning and environmental submissions, and undertaking further community and stakeholder consultation on the project. The project will also be considered by a Commonwealth Parliamentary committee inquiry in the coming days.

“Light rail from the Gungahlin to Woden will create a north-south public transport spine for Canberra, significantly improving transport accessibility in our region. Stage 2 from the City to Woden via Barton will cater for growing population and employment adjacent to the light rail corridor.

“The ACT Government is acutely aware of the national significance of many locations along the City to Woden corridor, particularly within the Parliamentary Zone.

“The design of the light rail alignment, stops and other features is being carefully managed to respect and enhance the heritage value of these locations.

“For example, as well as wire-free running, thought is being given to the simplified stops near landmarks such as Old Parliament House to reflect this iconic location. We are also considering other elements such as grassed tracks, similar to that in operation in Adelaide, to conceal the rail within the landscape of the national boulevard.

Minister Fitzharris said the ACT Government’s investment decision will be guided by a final business case for the project in coming months.

“Our business case can be finalised once we’ve worked through approval processes with the NCA and Commonwealth Government. However initial costings have been developed and are currently anticipated to be in the region of $1.3 to $1.6 billion.

“This is commensurate with the original cost estimates for the first stage of light rail, escalated to future dollars and reflecting additional costs associated with bridges, wire-free running, additional light rail vehicles and other factors.

“At this stage, we are looking to achieve approval of the business case in 2018-19, procurement in 2019-20, before construction would ultimately commence in 2020-21. Of course our timeframes will depend on Commonwealth support for the project, and associated planning requirements.”

“Light rail from the City to Woden will not only enhance access to the precinct, but will serve to demonstrate the Commonwealth Government’s commitment to our cities through its support of a modern, well integrated mass transit solution, helping to make our nation’s capital an even more liveable and sustainable city.

“The ACT Government will continue to work closely with the Commonwealth to progress these planning approvals,” said Minister Fitzharris.

The full mid-year update can be accessed from the TCCS website at: http://www.transport.act.gov.au/news-and-events/items/june-2018/city-to-woden-light-rail-provides-for-canberras-future