Why PTCBR is campaigning to bring back the regular timetable

It is early March 2022 and the PTCBR is calling on the ACT Government to reinstate the full bus timetable from Network 19, and return to pre-COVID operating frequencies. This issue means a lot to our members, and this article is going to take a closer look at what’s going on with our bus network, and why we’ve still got subpar services.

Passenger numbers are on the rise

Transport Canberra updates passenger figures on a daily basis. It’s one of the best data sources out there on data.act.gov.au, and it’s well worth checking out. They capture the data by boardings (each time you board a new service) and by journeys (so transfers between services within 90 minutes are counted as a single journey). Both have their own uses, but we’re using boardings in this article, and have averaged Mon-Fri boardings for each week to get an idea of how crowded the buses were in any given week. 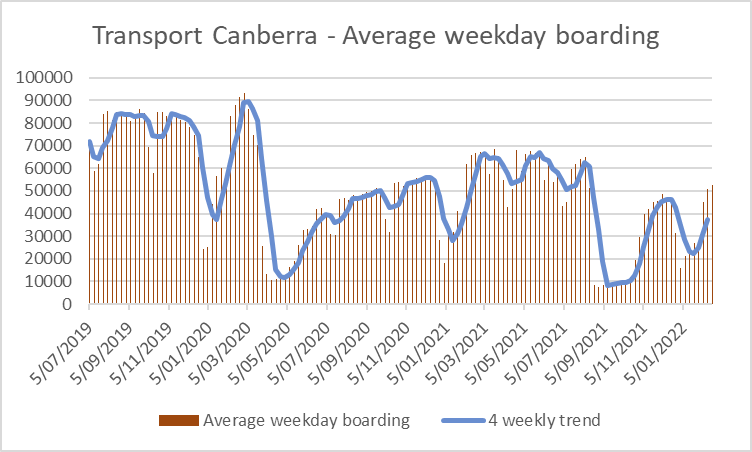 The chart above tells a remarkable tale. You can see that patronage steadily increased over 2019 as passengers adapted to the new network. In the final week of February, before COVID really made an impact, there were 93,239 average weekday boardings, a remarkable figure. Of course, passenger numbers plummeted to just 10,779 in April 2020, and slowly began to rise once lockdown ended. This pattern repeated for the August 2021 (Delta) and December 2021 (Omicron) outbreaks. There are also significant seasonal dips for the summer break, and smaller ones for the school holidays.

But most relevantly, people are really starting to get back on buses and light rail, as the Omicron outbreak appears to have settled down. Already, the week ending 4 March had us at 55,406, and that’s even with a good many Canberrans still working from home. Back in 2021, numbers had stabilised at around 65,000 or so. This is consistent with the general experience at public transport agencies around the world, with patronage around 70% of pre-COVID figures. How high will this go? With widespread vaccination and easing restrictions, we could well surpass 70,000 in the next month or so.

The interim timetable is not built for this

Since 2019 there have been two reductions in our seven day bus network, one due to Covid, the other due to Transport Canberra staffing issues. As Covid swept our community, Transport Canberra introduced an interim timetable as a stop-gap measure, with average weekday boardings of less than 8,000 passengers.

As emergency timetables go, it wasn’t bad. Half hourly all day service on local routes was still pretty decent, and there was no real need for additional peak hour services when no-one was catching them. But it’s 2022 and the impact of COVID has been significantly lessened by vaccinations and mask wearing. Unless we get those extra peak services back, things are going to get crowded at peak hour, quickly. Which is neither great for minimising COVID risks or encouraging more public transport use.

(EDIT: Transport Canberra incorrectly recorded some of the rapid passengers as being on local routes. In the week ending 4 March, the local routes had approximately 20,000 daily boardings, around the same as August 2021. In a statement, Minister Steel’s office said “Transport Canberra is able to provide sufficient capacity and frequency to service local route patronage as part of the current interim network”).

But it’s not just about crowded buses. Ahead of the commencement of light rail in April 2019 Transport Canberra gave us a brand new integrated Network 19 which optimised bus routes and removed some stops, but gave us frequent services in return. And, as they say, frequency is freedom.

Unfortunately this ambitious seven day network met with significant challenges and service cancellations on weekends as Transport Canberra were unable to find drivers that would agree to work the expanded weekend services. As a result, a month after the new network was introduced, weekend bus services were slashed to two hour frequency on local routes, with a focus on maintaining weekend rapid bus services (although buses no longer ran late on Sunday)(EDIT: Thanks to Martin for the clarification). This poor service—inferior to the weekend services it was meant to improve on—has been operating for nearly three years in reduced form.

Light rail weekend patronage, which was unaffected by staffing issues impacting upon service, has continued to grow, although weekend local bus services in Gungahlin fail to create the ‘integrated’ part of the integrated transport network.

The ACT Government blames COVID isolation periods for reducing the number of available drivers. And to a certain extent, that was true during the Delta lockdowns, when 10,000 Canberrans were in quarantine. But there aren’t many excuses now: Omicron cases have stabilised, and in other states bus drivers have been declared critical workers with exemptions from isolation. Canberra Metro, which separately operates the light rail, has been able to maintain full services throughout the pandemic.

The real culprit here is Transport Canberra failing to reliably deploy drivers when and where they’re needed. This has been an ongoing issue for many years, but really came to light when they couldn’t deliver the weekend timetable in Network 19, and we’ve been stuck with substandard weekend services ever since. The stop-gap measure of two hour weekend services dangerously looks like becoming the norm. Three years after the stop gap measure, we have over 200 more bus drivers than in 2016 and Transport Canberra still can’t deliver.

PTCBR is aware of the debate around industrial relations and rostering practices at Transport Canberra and its predecessors. To what extent union or management practices are responsible for the current situation is neither here nor there. If there are practices or rules which stand in the way of a seven day network, they need to go. We can’t have a network which leaves passengers waiting two hours at a bus stop in an outer Canberra suburb.

Network 19 was a bold statement of an integrated transport network to support a growing city, that the PTCBR supported strongly. Light rail has been a stunning success, the rapid bus route expansion has been a success. Covid has been an enormous disruptive event in our community, but now that our city is returning slowly to a new normal, and with public transport patronage growing, It’s ultimately the ACT Government’s responsibility to deliver on its transport promises. It’s three years since the weekend timetable debacle and the time for excuses is over. Whether it be changing rostering practices, industrial relations reform or considering other options, the Transport Minister must make fixing the situation his highest public transport priority for 2022.