The summary report for Woden to Civic light rail stage two has been released to the public and placed on the Yoursay website. The summary report followed extensive community consultation (that PTCBR contributed significantly to). There are no real surprises from the report with overwhelming public support for light rail to travel between Woden and Civic, through City West and the major employment hubs of Parkes and Barton.

Although roughly half the public supported a dogleg to the Canberra Hospital, at the Woden end, that option is unlikely to be taken up due to “uncertainties raised about how convenient it would be to (access) the hospital entrance and the implications for the future southern extensions of the network”. These are concerns that the PTCBR raised in its submission to the ACT Government on stage two.

Although it may seem that many people use public transport to access hospitals, it is not supported by data. Rerouting the Woden terminus to the hospital would also impact options to extend light rail from the Woden Town Centre to Tuggeranong in the future.

There was also strong support for access to Manuka Oval from light rail, and more stops in Barton to cater to the workforce there. By using this route many national attractions such as Old Parliament House, the National Gallery, National Library and Reconciliation Place are in walking distance from light rail stops. The report also indicates that pedestrian access to light rail stops along Adelaide avenue require research and careful design. 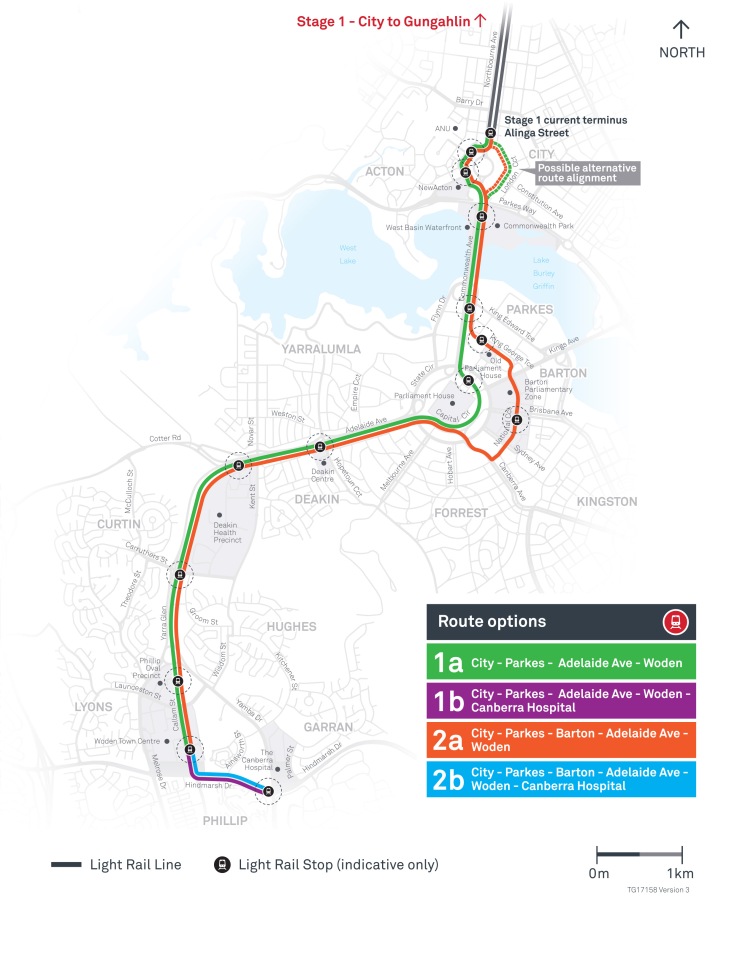 At the conclusion of this stage of the consultation process, it it appears that the light rail stage two route likely to be selected, is very similar to Route 2A from the initial options offered for community consultation in May this year.

The next step in this process is for Transport Canberra to complete the business case for light rail stage two.

The summary report can be found here.

The media reported on the report announcement here:

As the Government progresses its technical and expert analysis, community engagement on Stage 2 of the Light Rail network shows Canberrans have a strong preference of which route they’d like to take to Woden.

Minister for Transport and City Services, Meegan Fitzharris said that the result of the consultation demonstrates strong support for Light Rail Stage 2 to travel to Woden through Parkes and Barton.

“We have had an overwhelming response to the online survey on Your Say, with 4772 people providing their thoughts on preferred route options, alignment and stops,” Minister Fitzharris said.

“The report indicates that 75 percent of respondents support a route that travels through Parkes and Barton.”

Community feedback indicates the key reasons for support include:

“I would like to thank everyone who has provided feedback on Light Rail Stage 2,” Minister Fitzharris said.

“As the project progresses, more opportunities will be provided for Canberrans to have their say and engage on broader issues identified along the southern corridor and related transport issues for Canberra.”

At the same time the Government will continue to combine the findings of its expert analysis with the community’s views to develop the business case for Stage 2 of Light Rail.

The business case will be considered by the Government in late 2017/early 2018 while in the meantime Stage 1 of light rail continues to progress well.

To view the Light Rail Update, including the consultation summary report, please visit: