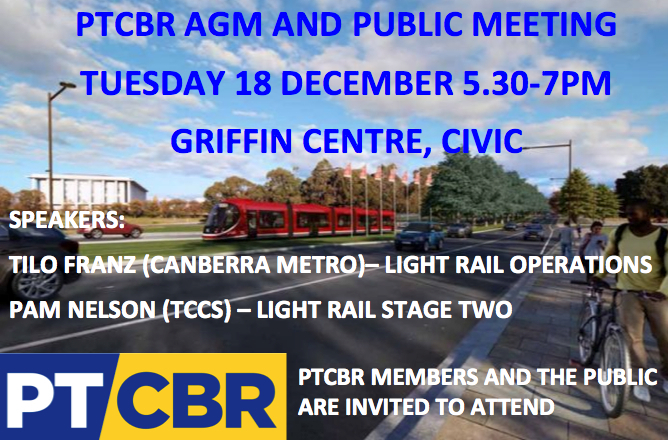 The Public Transport Association of Canberra, Annual General Meeting for 2018 will be held on:
Date: Tuesday December 18
Time: 5.30-7PM.
Venue: Griffin Centre in Civic.
The AGM

At the AGM, all committee positions will be declared vacant and nominations sought from financial PTCBR members. Nominations close on Sunday 16 December. If there is only one nomination for a position, that person will be elected to that position. If there is more than one nominee, an election will be held.

Public Meeting
Following the AGM, there will be a public meeting. Two speakers have been invited to present on topics of interest to our members:
The Committee hope you can attend the AGM and Public Meeting, and thank you for your support in the last year. 2019 will be a big year in integrated public transport in Canberra. Light rail stage one will commence, and a completely redesigned bus network will be introduced.
All members of the public and financial members of the PTCBR are invited to attend. Only financial members can vote at the AGM.