Transport Canberra held a media event on Friday 25 August 2017 to announce that new electric and hybrid buses would be entering regular fleet operations from Monday. They will be trialled for twelve months. Two of the three buses from Carbridge and Volvo have been in Canberra for a few weeks, and have been wrapped with AOA branding visibly proclaiming their drivetrain, and equipped with Nxtbus and MyWay equipment as well as the regular fitout of TCCS specific signage in the passenger area. The third bus, from Carbridge, will enter service in December.

The buses are externally very similar to regular buses in the TCCS fleet. Most people wont even know they are travelling on one (except they will wonder why it is so quiet…).

The Carbridge BYD Toro is made in Malaysia from Swiss body components and a Chinese BYD drivetrain. There are around 15,000 of the same drivetrain in operation worldwide, but only around 10 in Australia at present. Two will be trialled in Canberra.

The Volvo B5R is one of around 20 in Australia, with an Australian made Bustech body. It is a diesel electric hybrid bus. One will be on trial in Canberra.

Representatives from Carbridge and Volvo Australia attended the media launch. It is of great interest to both companies as not only are electric and hybrid buses the future of buses, fleet replacement of Canberra buses will see the older Renault and Dennis buses phased out and newer buses phased in. The results of the trial could influence future fleet replacement tender requirements.

Both buses have fairly standard passenger bus interiors. They have been fitted with bike racks, Nxtbus and MyWay equipment in use in all Canberra buses. Both buses have rear door exits, that are wide and quite usable (and the ‘No Entry’ stickers have NOT been applied).

The only clear difference between the two is that the Carbridge has a noticeable step between the low floor front passenger area, and the rear area. The Volvo stepup is not as high, and has a slight incline. The Carbridge representative advised this would change in future versions, as battery packs and drivetrains were updated.

Both buses are new, and have the new car smell. The squeaks and rattles are possibly amplified and more noticeable because…

They are so quiet. They hum.

The Carbridge is so quiet that you can hear a person in the back row of the bus speaking from the front of the bus, while the bus is driving through Civic. Out on the road, all you can hear is the hum of the drivetrain (or maybe its tyre noise?).

This video of the Carbridge travelling along Parkes Way to the Arboretum shows how quiet it is.

The Volvo bus is a diesel electric hybrid. It takes off under electric power and the diesel engine kicks in as it needs it. The diesel engine also powers the battery pack. It is a quiet bus, and although it is not as quiet as the Carbridge, it is much quieter than a diesel bus, as it doesn’t rev away as it takes off from a standing start. It just glides away. The video shows this quite well. On the road, I doubt a passenger will notice.

The ride of both buses is very good. Around London Circuit and on Parkes Way the Carbridge was very smooth. Around the Arboretum the Volvo was also very smooth and rode well. The Carbridge is perhaps firmer than the Volvo. A full load of passengers and a few months of operation might make a difference.

Canberra bus drivers are renowned for their lead foots and quick application of brakes. They might need to watch that on these buses as they just GO. Full power is available as soon as the accelerator is depressed. As the accelerator is released, brakes apply automatically. I spoke to the driver of the Carbridge bus and he admitted he was being careful, as it was a new bus. Both drivers were very very keen to show off the buses (always a good sign).

There might need to be a period of adjustment and training for drivers of these buses. The snappy speed and quick braking abilities of both buses, might need to be tempered with a full load of Canberrans glued to their smartphones – unless they want to be thrown all over the place as a P plated Hyundai cuts in front of a bus at a set of lights.

This trial is significant. The ACT Government is committed to better public transport, transitioning to fully renewable sources of energy and reducing greenhouse gas emissions. The trial of electric and hybrid buses is a key component of the longer term policy goals in these areas.

The average Canberra bus travels around 350 kilometres a day. Times that over a year, over an entire fleet of buses and that is an awful lot of diesel fuel consumed, and a lot of carbon dioxide and other greenhouse gases emitted. Despite recent improvements in diesel engine technology, fully renewable sources of power are better for a range of reasons.

Electric and hybrid buses are being trialled worldwide, and significant technological advances are made every year. As fleets are ordered, manufacturers are likely to offer models with features that public transport operators demand. The cost of fully renewable electric power may be similar to the cost of a diesel hybrid bus that generates power as it operates. Data collected in a trial can determine this.

Importantly, for public transport to be sustainable it must be used. Making public transport frequent, reliable and attractive will attract and retain patronage, Passengers want a comfortable ride that arrives on time and when it is needed.

The two buses used in this trial are both attractive and comfortable. The heaters work well on both. The seats are comfortable and there are ample hanger straps. Disabled access is good; both have low floor entrances, and flipup seats in the front passenger area to cater for prams and wheelchairs. Both buses have bike racks fitted. They are also quiet and the electric bus is fume free. The hybrid bus only operates its diesel engine when the bus is on the road, so it will also be fume free when at a bus interchange.

The days of buses idling and pouring diesel fumes into the atmosphere are on their way out. This will offer significant advantages for urban and transport planners in the future. The lack of noise these buses emit means that residents living near bus interchanges will barely notice them coming and going.

If the trial proves that these types of buses is successful, then the familiarity of the buses will make their adoption fairly seamless from a passenger perspective, and pretty straightforward from a driver perspective. The drivers position and instruments are very similar, the only difference being immediate power, lots of torque, and that the brakes are applied when the accelerator pedal is lifted.

Mechanically the buses are probably less work than a diesel bus. However that can be determined over the yearlong trial. Both types of bus will be operated out of the Tuggeranong depot, and some equipment specific to electric and hybrid buses has been installed out there, and some modifications to the TCCS bus tow truck have also been carried out. Both Carbridge and Volvo will be keen to ensure that any technical support will be available promptly.

This year long trial of two different technologies will provide invaluable data and experience to Transport Canberra and ACT Government policy makers. The trial coincides with the introduction of light rail stage one from Gungahlin to Civic and a massive shift in Canberra’s transport patterns.

The failure of the previous electric bus tender earlier this year was unfortunate, but when you are sailing close to the cutting edge that can happen. We can’t let the fear of failure stop us from exploring a better future. The two models selected for this trial are from manufacturers with proven track records, and Volvo is one of the biggest truck/bus manufacturers in the world. Both want to make this work.

Light rail will radically change public transport in Canberra, with the heavy lifting carried out along a mass transit light rail spine that will in several decades extend to all town centres. While the rapid buses may be replaced by light rail, buses will always have a major role in servicing our suburbs, delivering passengers to light rail and taking children to school. Integrated transport and active transport will lessen the requirement for people to own two or more cars, and will build a reliable public transport network that can shape urban planning around transport corridors.

These new electric and hybrid buses are a key part of our public transport future.

Reporting on the electric and hybrid buses 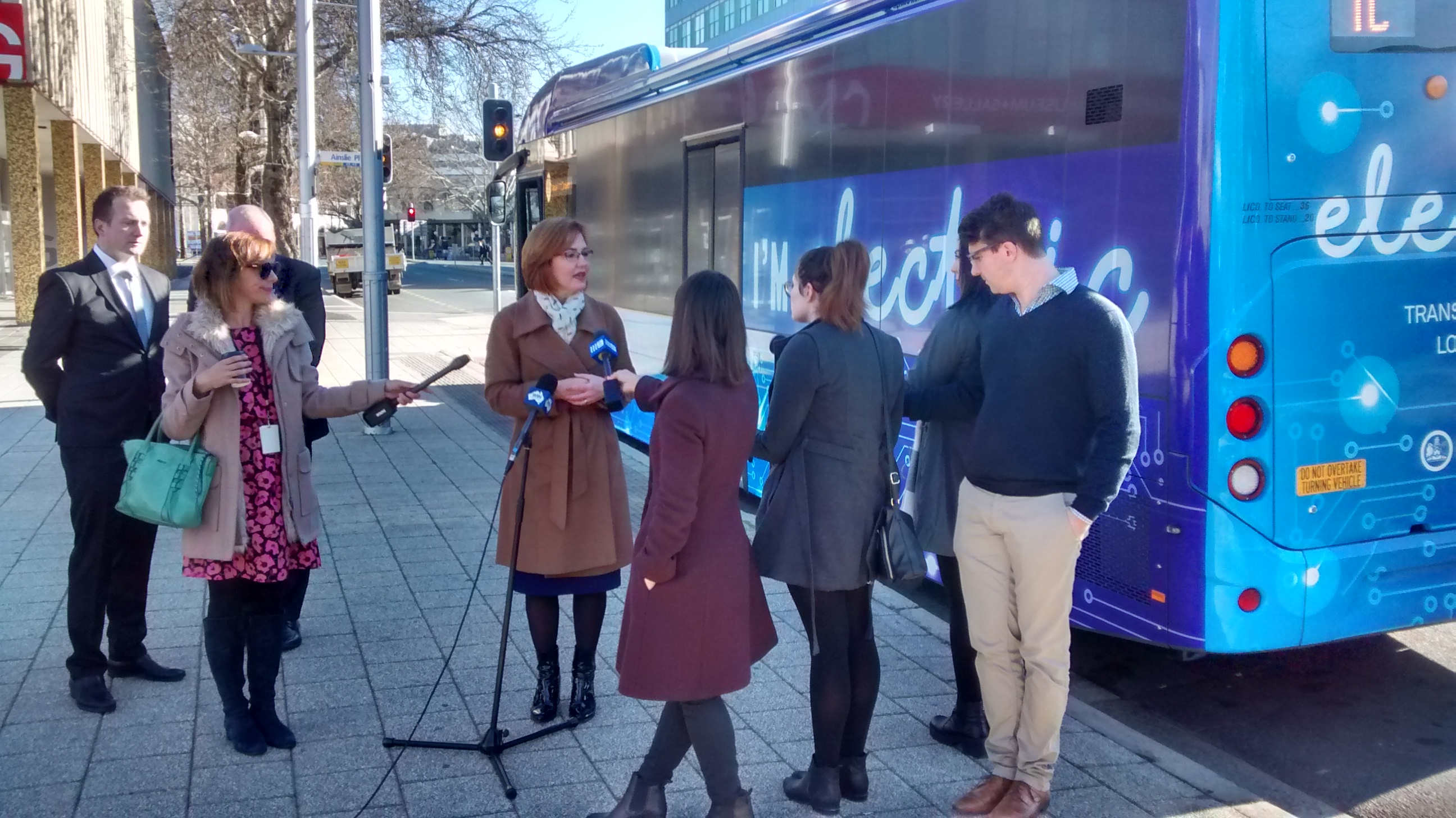 Two of the three electric or hybrid buses Transport Canberra will use during its alternative fuel bus trial have arrived in the ACT, wrapped and ready to roll into action.

Minister for Transport and City Services, Meegan Fitzharris said the first two buses, one Carbridge electric and one Volvo hybrid will start service as part of the Transport Canberra bus network in the coming weeks.

A second Carbridge electric bus will join the fleet in December 2017.

“The ACT Government is committed to looking at new and innovative ways to improve our public transport system to manage Canberra’s growth, reduce congestion and protect our liveability,” Minister Fitzharris said.

“These buses are another example of the ACT Government’s forward thinking in regards to both public transport and minimising human impact on the environment.”

“Recent improvements in technology mean electric and hybrid buses are becoming more economical and operationally viable, which is why we believe it is the right time to run this trial.”

The two plug- in electric buses by Carbridge carry battery technology developed in China and have been specially built in Malaysia for this trial. Similar vehicles are currently used at the Sydney and Brisbane airports to provide passenger shuttle services.

The trial, which will see all three buses run as part of the bus network until the end of 2018, will enable the ACT Government to assess the viability of using alternative buses within the bus network to see if they can progressively replace the existing fleet.

These buses have been installed with the necessary equipment like MyWay ticketing, CCTV, bike racks and the NXTBUS real time information system.

For more information on the trial, visit www.transport.act.gov.au. The Parliamentary Agreement between Labor and the Greens includes the promotion of integrated transport.