The Public Transport Association of Canberra are pleased that the Canberra Liberals are now supporting light rail in Canberra. This very welcome about face has occurred following representations by the Mitchell Traders Association to their local members after recently realising a light rail station was not going to be built in Mitchell as part of light rail stage one. The benefits of light rail for residents and businesses along the light rail stage one corridor have been supported at two elections, and it is pleasing that business owners in Mitchell, and the Canberra Liberals, now support better public transport options.

In the ACT Legislative Assembly on Wednesday 19 September, Shadow Transport Minister Andrew Wall MLA will table a motion (below) calling for a light rail station to be constructed in Mitchell, and compensation for businesses affected by light rail construction.

PTCBR are not sure why the motion by the Canberra Liberals motion is being made now, as TCCS Minister Meegan Fitzharris MLA has already indicated that a light rail stop in Mitchell will be built (the supporting infrastructure is in place) and that it is a matter of when it will be built.  The Mitchell Traders met with the Minister recently and were also told that a stop would be built.

Light rail will provide tremendous access directly to Mitchell by thousands of potential customers and employees. A light rail stop in Mitchell that can be built between stages one and stage two construction, would benefit everyone.

Although a stop was discussed in the consultation processes, no Mitchell stop was planned or appeared in the business case. The many new businesses that now front Flemington Road will benefit from a light rail stop, and better integrated bus services to link with the bus routes that already travel through the Mitchell precinct.

Although it is very positive that Mitchell Traders and the Canberra Liberals now support a light rail stop in Mitchell, it is a valuable warning to other parts of Canberra that will see light rail extended to their town centres over the coming decades. The best time to engage in consultation for an infrastructure project is when it is being planned, not when the bulldozers are visible from the window of your business.

Business and commercial and residential property owners along the corridor for the second stage of light rail from Civic, through Parkes and Barton to Woden, are urged to take part in consultation processes and express a view on stop locations and possible routes.

The motion also asks for compensation for business losses due to light rail construction activity. Although it is unfortunate for any business to suffer a downturn due to infrastructure provision, the benefits that these businesses will accrue from light rail running past their door, will be many.

PTCBR (and its predecessor ACT Light Rail) have always supported a light rail stop in Mitchell, and hope that the Canberra Liberals motion and the ACT Governments existing stated support for a light rail stop will see budget funds provided for a stop to be built in the very near future. Bipartisan support for public transport is always positive.

MR WALL: To move—That this Assembly:
(1) notes the important contribution that businesses in Mitchell make to the ACT economy and the considerable amount of revenue collected by Government from Mitchell traders through rates, payroll tax and other fees and charges; and
(2) calls on the ACT Government to:
(a) construct a light rail stop at Mitchell;
(b) explore what compensation can be offered to businesses severely
impacted by the construction of light rail;
(c) construct additional all day car parking in Mitchell (especially for
workers on the eastern side of Mitchell);
(d) detail how Mitchell will be serviced by buses following the operation of
light rail;
(e) include Mitchell on a regular schedule for street sweeping;No 31—19 September 2017 541
(f) improve the urban services delivered in Mitchell, such as footpath and
streetlight maintenance; and
(g) undertake consultation with businesses in Mitchell about
implementing urgent minor capital works in the public realm. 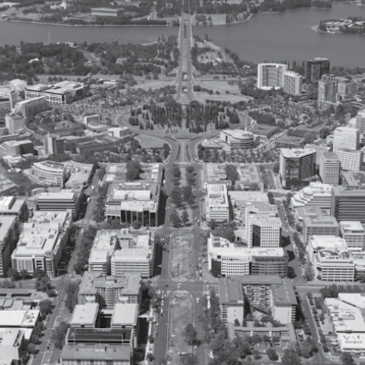 Who did Colliers survey?

The survey consisted of submitting ten questions to ninety property owners along the Northbourne – Flemington light rail route (out of 110 property owners). 36% of owners responded to the survey.

Colliers felt there had been a lack of engagement with commercial property owners, particularly along the Northbourne Avenue and Flemington Road light rail corridor.

Colliers survey focus was on the impact of light rail on commercial property in the short, medium and long term. The primary objectives of the survey were for Colliers to understand the following:

What did the survey find?

Overall the survey results show support for the light rail project and its positive benefits. However, some of the findings from the survey are a little startling for supporters of better public transport, and show that more work needs to be done communicating with business and property owners about the benefits that light rail will bring. Some of the responses are contrasting and reflect the differing views of respondents overall.

According to the survey results, commercial property owners believe:

While there was strong consensus of the benefits of light rail, respondents had some concerns about the project believing that newer technologies may supersede light rail and affect the long-term viability of the project

Matthew Winter, manager at Colliers International, said respondents also had different views on when to proceed with future light rail stages and which town centres should be priorities. “Owners indicated the light rail network should expand from CBD to Woden next (33%) and Canberra Airport (30%).

The survey also supported the urban renewal benefits of light rail, Winter commenting that “Despite not necessarily supporting the proposed technology, half the owners surveyed said now is the right time for light rail to be implemented and indicated the project would serve as a catalyst to reinvigorate tired gateways,”.

With the business case for stage two of the light rail project to Woden ( a tired town centre in dire need of urban renewal) being prepared now, this support from commercial property owners is encouraging.

Work to be done in communicating light rail objectives

The responses from the property owners also show that there is still significant work to be done in communicating the benefits of light rail to the business community. Almost half the respondents believe light rail would have little to no impact on traffic congestion, a fundamental objective of the light rail project for Gungahlin residents and those commuting by car and bus along Northbourne Avenue, Canberra’s most congested road.

Property owners also believed there was a lack of information about transit times and fares, that may lead to prospective passengers commuting by car instead, finding it a cheaper and more direct option, despite traffic congestion. They also believed that people would use light rail to commute to and from work, assuming the stops were near office locations and “Park and Ride” locations were provided.

Property owners also expressed concerns that a slow light rail service and the possibility of interchanging to other travel modes in order to reach final destinations may also be impractical for most.

Winters also observed that “Given the strategic land release programme of the ACT Government along Northbourne Avenue and Flemington Road, many owners noted the likely demand from developers for these opportunities and had investigated possible options,” including sale or conversion of their properties.

“This seems to support the notion that further amenity and infrastructure along the corridor will have a positive benefit for owners through improved tenant retention, increased accessibility, and provide a solution to the current parking shortage, particularly in areas such as Braddon.”

How useful is this survey?

PTCBR has contacted Colliers and asked when a survey of Woden property owners will be conducted. It would also be beneficial to expand the survey (if repeated) to include property owners within the TOD corridor, roughly a kilometre from the route. They advised that they are planning to conduct future surveys (including follow-ups), particularly once the direction of Stage 2 is confirmed. This may include Woden and Barton owners subject to the route.

Although the survey size is small, it is focussed on a specific demographic that shapes how the corridor will grow. Their views are very useful for the current project, and in planning communications strategies for future stages of the light rail network In Canberra.

The Public Transport Association of Canberra is the regions peak public transport lobby group. Their website is at ptcbr.org and a robust discussion on public transport and planning takes place at their Facebook page.